It’s a hand-drawn, fast-paced, 2D side-scrolling video game platformer in which you help an assortment of runners race through a variety of dangerous locations, using your environment and special power-ups to escape my bloodthirsty jaws.

But just when you think you’re safe, I come storming back again and again, destroying everything in my path and stopping at nothing to catch my next meal (you). Designed to be a community crowdsourced project, Kickstarter pledges give supporters a say in the design of this game’s characters, powers, and environments.

Want a radioactive Rexzilla that spits out fiery meteors while inside a giant monkey’s guts?—Done!

Want an Alien Queen Rex (complete with chest-bursting parasite) chasing a transforming robot out through a space ship’s air lock?—You got it!!! (Levels can be as crazy as your mama after a case of Red Bulls.) Fun with a dark sense of humor, your ever-changing roster of runners will be subjected to all manner of twisted tortures during their escapes.

Even if you successfully navigate each perilous course, you still may not make it out alive! (Hint: A dinosaur’s gotta eat.) After all, I’M the star of this game—NOT YOU! This ain’t your great great great great great great great great grandcestor’s video game!If BIT.TRIP RUNNER made sweet, sweet love with RAMPAGE, and nine months later their baby was raised by RAYMAN (the family butler), that creation would be named RELENTLESS REX: THE GAME! 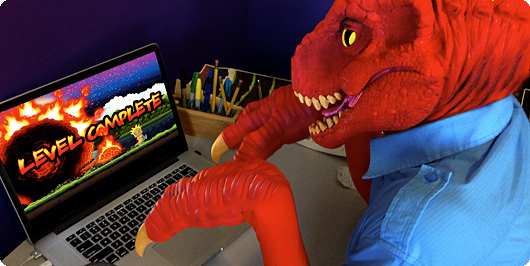 • Created by a T-Rex and YOU—
co-design characters, Rex-modes, backgrounds, and more! Financial supporters vote for future content or submit their own, unique ideas! The variety and insanity of this game is only limited by the size of your tiny human brains!

• Sitting comfortably between Full HD
& 4K resolution, Relentless Rex is filled with beautifully-detailed, hand-drawn… er, CLAW-drawn illustrations and animations. (Anything else is like rubbing dirt in your eyes.)

• I “go through” A LOT of runners in my
game, which means more characters for you to play!

• Every three levels is drawn and
animated in different styles by amazing, new game artists, keeping your experience visually fresh!

• This is a game with SPEED—
“How fast?” Why don’t you ask the last five runners I chased down? Oh, that’s right… THEY DIDN’T MAKE IT !!!

• Marvel at my lightning-fast,
death-defying adaptations as you desperately race to find radical power-ups to help you prolong the inevitable escape certain death.

• Challenging, carefully-crafted levels
and bold, graphic characters with personality—designed with FUN and DIAGNOSABLE GAME ADDICTION in mind! Just one hit & you can’t quit 🙂

• Compatible with many game ……
controllers.

• Relentless Rex balances action, style,
and humor with a dark streak—SO ENGAGING it will attract your kids, SO TWISTED it will send them to therapy.

• Levels flow into each other and pick up
where the last one left off, creating a real sense of a perpetual chase!

• And lastly, please always remember—
I’m RELENTLESS! I will hunt you down if you don’t support my game… DON’T TEST ME HUMAN!!! 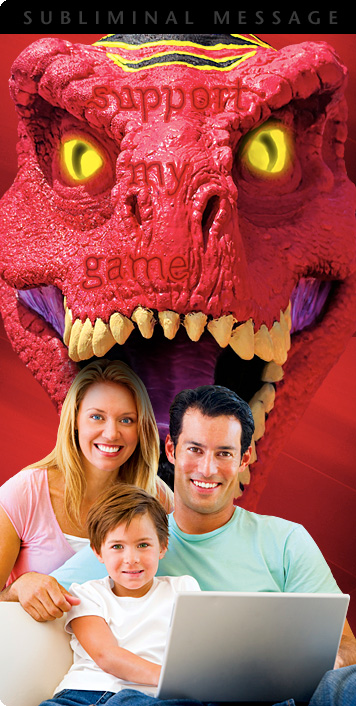