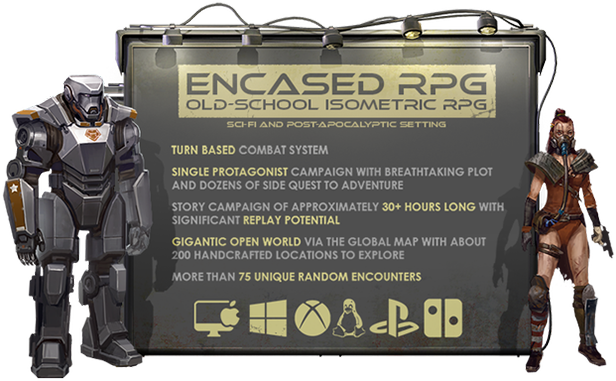 Encased RPG: The events of the game happen inside the Dome – an artificial construction of unknown origin.

The Dome is indestructible. Technology, items, and relics can be extracted from it, but people who enter the Dome are not able to leave it.

Beneath the ground yet more mystery awaits, as the Dome is just the tip of an enormous complex hidden beneath the sands.

These ancient underground labyrinths contain artifacts, weapons and AI systems that control the complex… not to mention lethal traps and dangerous anomalies that guard the riches. 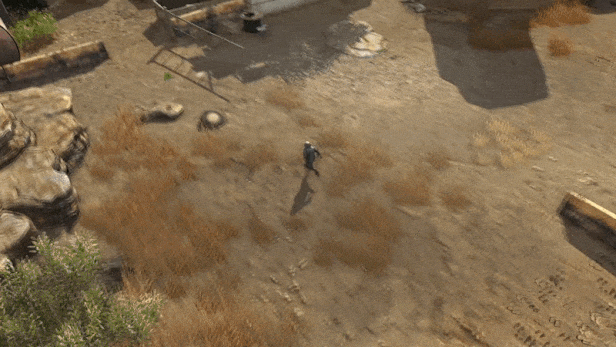 Research and exploration of the Dome are conducted by staff of the C.R.O.N.U.S. Foundation.

To the outside world, little is known about the inner workings of C.R.O.N.U.S.

Those that sign up for a life within the Dome do not speak of their experiences, and those managing the Foundation from outside speak even less.

Thanks to the powerful artifacts extracted from within the Dome, C.R.O.N.U.S. have become powerful enough to hold sway over the leaders of the world.

Now, the fate of the entire planet rests in the hands of the soldiers, businessmen, scientists and even criminals who comprise the ranks of C.R.O.N.U.S.
In the end, the Foundation’s political machinations led to nuclear war, the echo of which was heard inside the Dome.

All communication means with the outside world were lost, and another power has now arisen – something that explorers never faced before.

An intelligent entity has awakened in the depths of the underground complex, causing death and destruction.

Within the Dome, the survivors will have to build a new civilization upon the ruins of the old one, and the player’s character is among them.

The world of the Dome has from its discovery been a place full of weird creatures and dangerous traps.

There’s no telling what lies around the next bend in the road, or inside the twilit cave, or beneath the murky waters of the swamp. But who knows?

Perhaps humans are the biggest threat in this bizarre land. 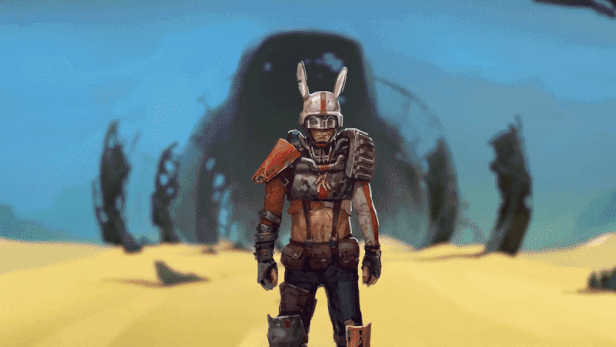 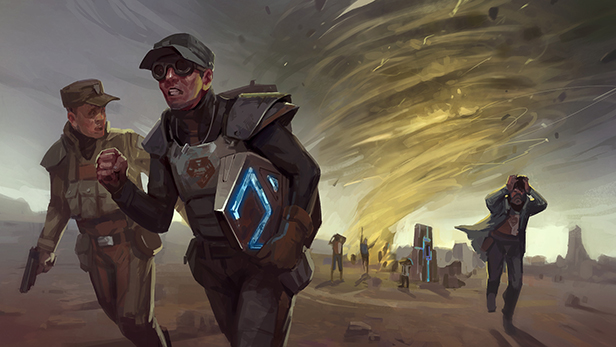 Maelstrom dominates everything, its telepathic rage sowing chaos in the minds of everyone trapped under the Dome. But the player, having “freed” the entity, enjoys a special relationship with it.

The two of you have regular interactions, and Maelstrom may even grant “wishes” to the player… but be warned: every call for assistance will eventually incur a price.

– Impacting the gameplay
Maelstrom’s power grows stronger the closer you move to the heart of the Dome, and that is exactly where you must go to find the answers.

There is a special stat influencing interactions with Maelstrom:

Psyche. Resistance to Maelstrom’s negative effect can be developed in several ways, and develop it you must before you may venture deeper into the Dome.

There is also a special skill branch related to Psychic abilities.

Following the devastating events of Maelstrom’s release, CRONUS splintered into multiple other, often warring, factions. The world has changed while you were in stasis, but has the nature of Man?
Trapped inside the Dome like spiders in a jar, these factions will show the worst and best of humankind. Will you join them, or strike out on your own?

Each faction has two unique endings. Likewise, there are two endings for those who choose to go it alone.

If the player chooses to commit crimes against society, he will incur penalties to his reputation, and earn titles ranging from ‘Petty Thief’ to ‘Enemy of the State,’ or even ‘Threat to Humanity.’

The player may be fined, imprisoned, and even executed. Luckily, there are several ways to deal with your arrest: bribe judges, organize a jailbreak, or return alive from the Labyrinth of Death (this last one may be particularly challenging). 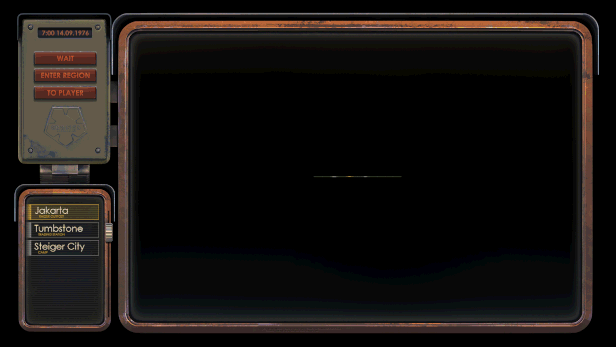 The Dome is huge and for the most part is an open sandbox (if you are able to resist the psychic presence of Maelstrom).

The map consists of more than 170 sectors, each carefully planned and handcrafted.

There are abandoned bunkers, black caves, the complexes of the Forefathers, as well as wastes, swamps and other biomes.

Random encounters have been a standby of the old-school role playing game since the dawn of the genre.

But Encased will bring them to a new level. Each encounter is a separate post-apocalyptic story, not just a bunch of critters attacking you.

Want to participate in a game of Russian Roulette? Find a pathway through a deadly anomaly to find a rare relic?

Defend an automated rail transport from raiders? Or end up a victim yourself?

All this awaits you, in addition to more classic encounters like fighting bandit scum and haggling with caravan traders. 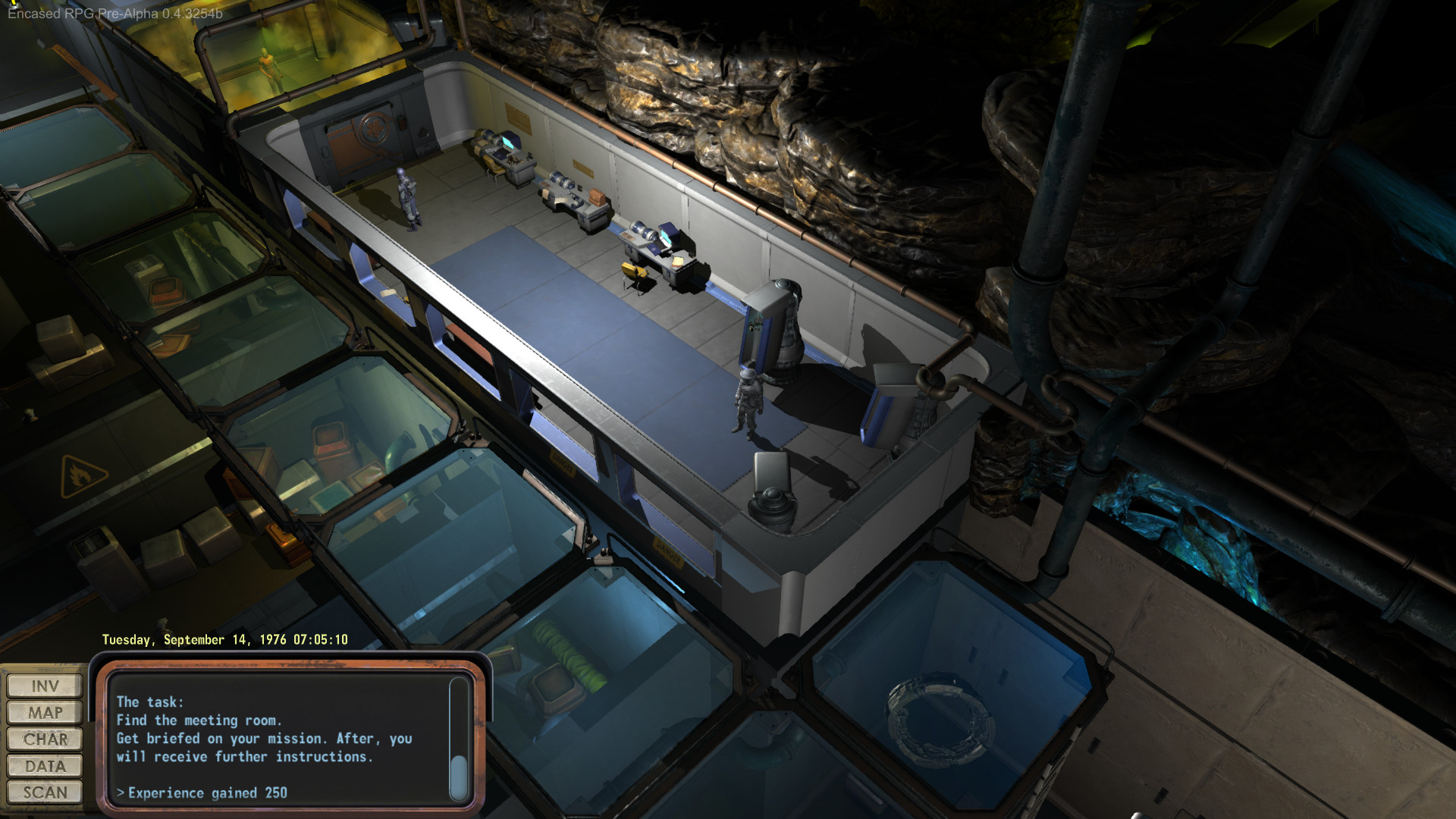 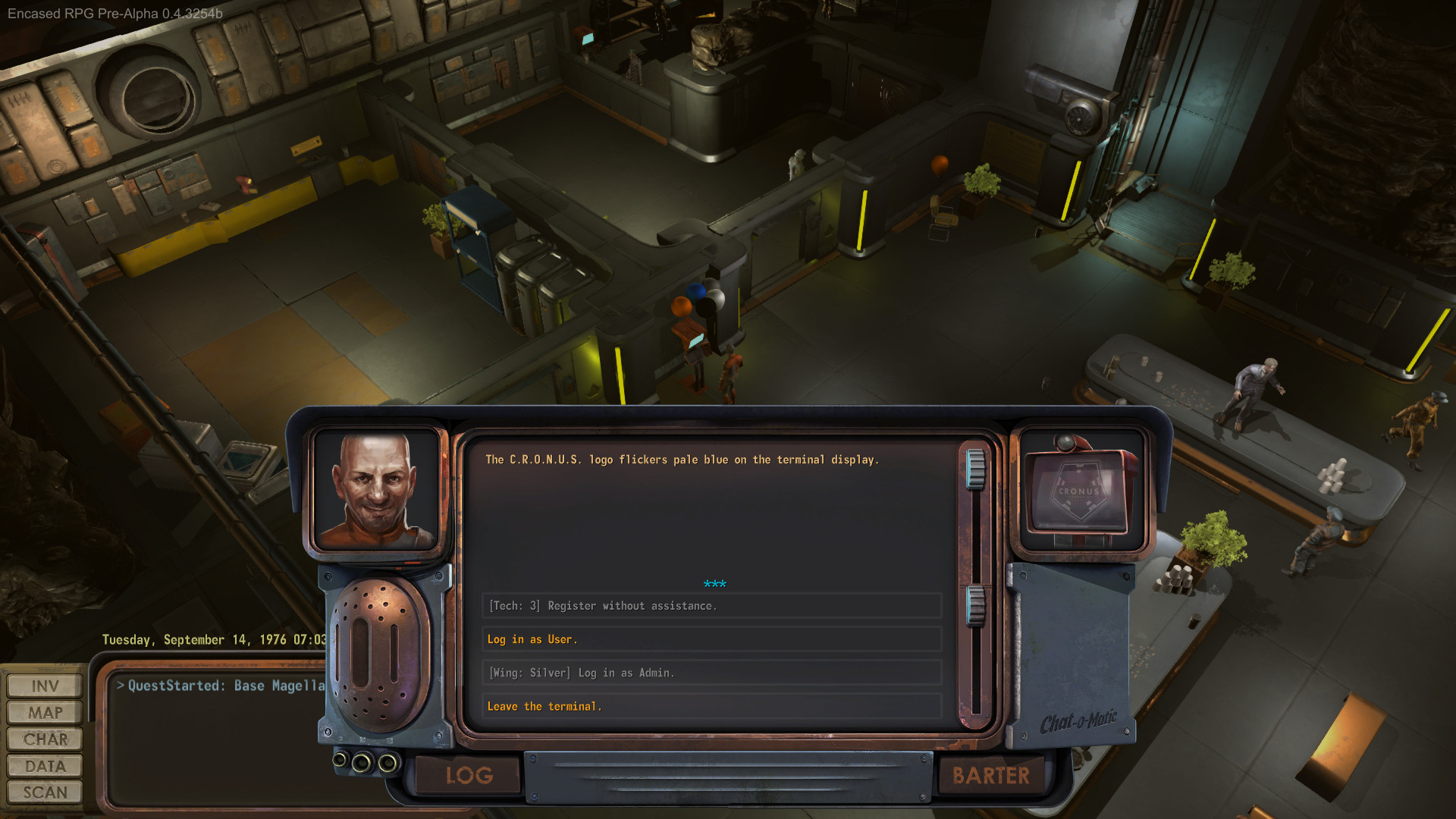 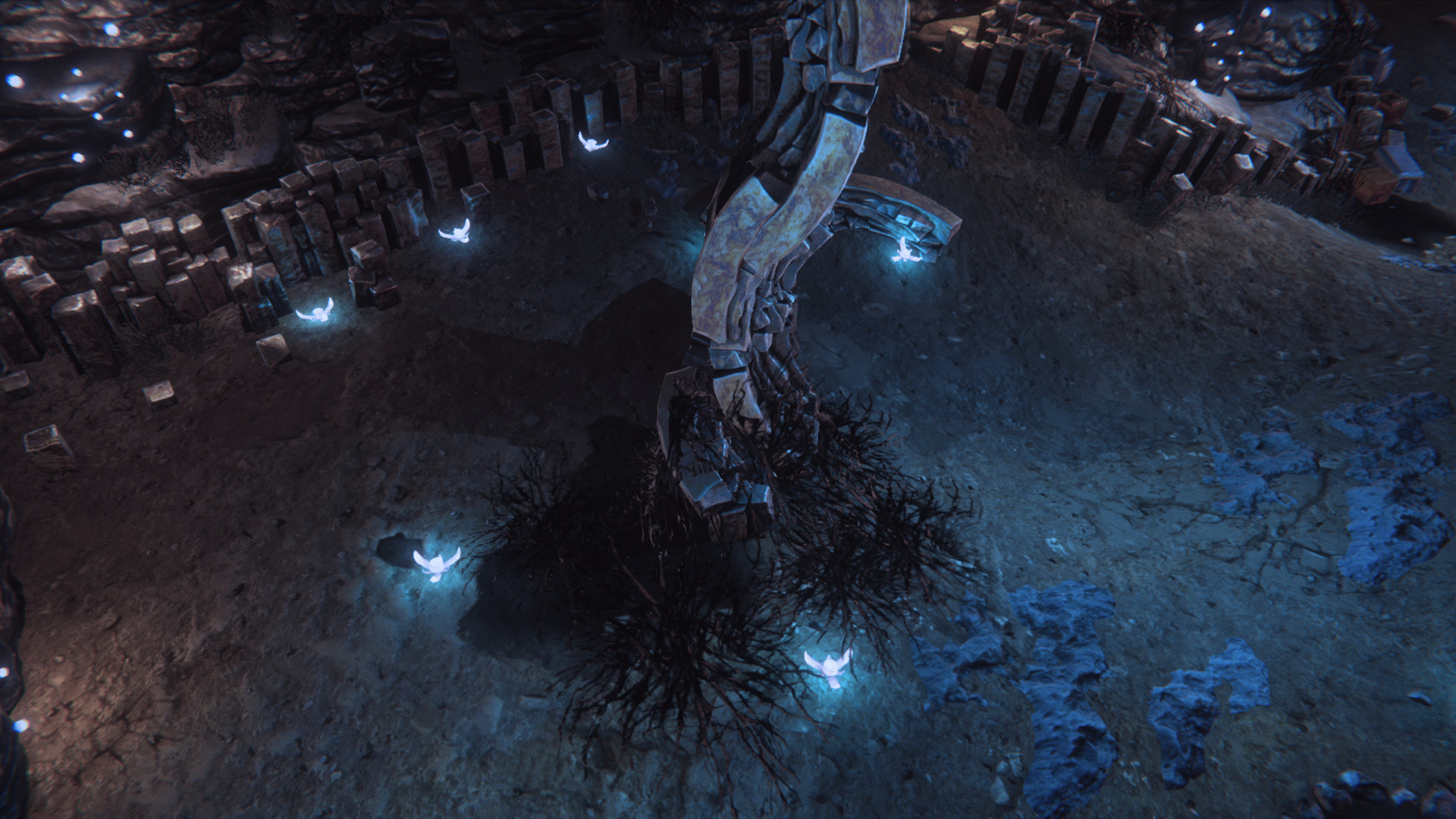 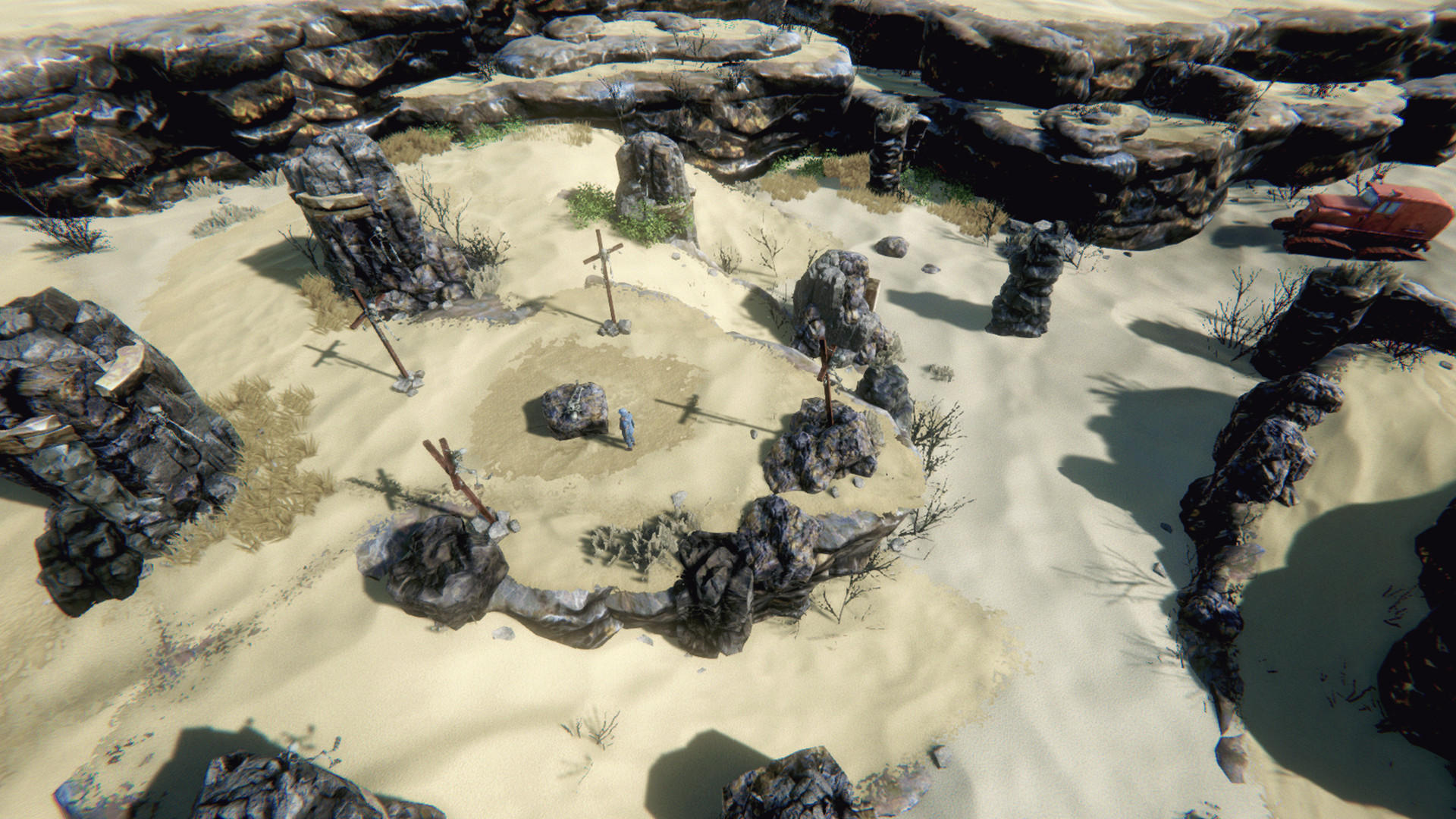